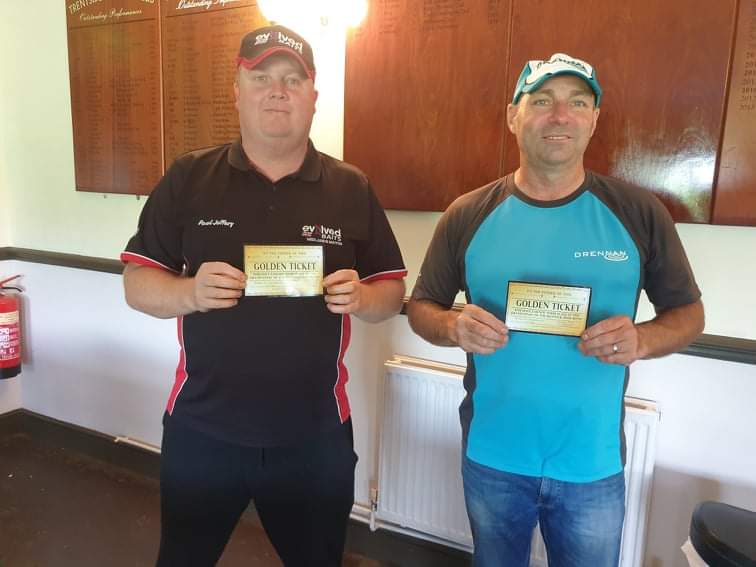 Today saw the 5th qualifier, for the Renwick Rose Bowl being held on the banks of the River Trent at Cuttlebrook.

With biblical storms forecast and a strong wind, I am glad that i was secured in the comfort of my own home, draped in my snuggliest PJS and warm tea in hand.

After helping the lads to their pegs the all in was called, many opting for the whip or stick line trying to get some early fish in the net.

Paul Chapman, who had drawn End peg 10, chucked the feeder and had two initial pulls, however nothing materialized on this line.

Half way through the match, many of the Anglers were admitting to 2lb, however we all know that fisherman can not “lie” straight in bed, so we presumed this to be double.

As predicated the heavens opened around the three hours mark and Neil along with the rest of the Stooges, ran from the banks to the safety of their cars like rats fleeing a sinking ship, Leaving our brave piscators to fend for themselves.

Not to be scared off by a little rain, the Anglers sat it out and concentrated on their quarry.

As the rain cleared Neil came out of the comfort of his car, with many comparing the exit to that of a Meercat leaving its burrow. He then went about his task of making sure everyone was safe and accounted for.

At the all out, there has been some great weights considering the weather. The average match weights have far surpassed the Matches that have gone on else where locally on the river.

In the first section, Dean Cherrington took the section win from end peg 1 and earned a place in the final with 7lb. Dean caught the odd fish on the short pole and Bolo when the wind allowed. However he caught the majority of his fish, using maggot on the Waggler, feeding Hemp over the top and fishing and 3/4 depth.

The second section and overall match win came from Paul Jeffrey, who was on peg 6, which is roughly around half way down the meadow field in the middle of the sections.

Paul, started on the stick but had a slow start and went through various tactics such as Waggler, Bolo but only managed to put a few fish in the net. Taking the gamble he decided to up the feed going in and fish an overshotted whip rig at 8m to hand.

This had the desired effect and saw him putting together a few better stamp fish. In the last hour the river rose and this brought more fish into his swim. At the end of the match Paul said that he was getting a fish every put in, which goes to show that he who dares wins. When the scales arrived Paul put 12lb 8oz for the section and overall match win.

Well done lads, see you in the final.

BMAA says: Although the weather was horrible, it goes to show what great fishing can still be had on our rivers. With this competition in its first year, with the support of our Anglers and the committed members that give up their spare time to put on these events, it can only go from strength to strength. The club is now committed to opening up and pegging more and more stretches of the bank and with the knowledge and experience of long time committee members such as Dave Fern and Roger Smith, the match section and its dedicated group of helpers are able to open up waters that haven’t been fished for years, which will in turn help to grow the match scene and pleasure fishing across the board for all our members.

One final note, one of our Anglers unfortunately took it upon themselves to embarrass themselves and cause a scene at yesterdays match. This was down to not winning the section and unfortunately it is not the first time they have done so. BMAA would like to remind all our members and individuals fishing the open matches, that our stewards are there off their own back, they do not receive payment and we will not tolerate any kind of abuse. If winning a match means so much to you that you need to resort to this kind of behavior, if it does not go your way then we suggest you seriously consider sticking to pleasure fishing.