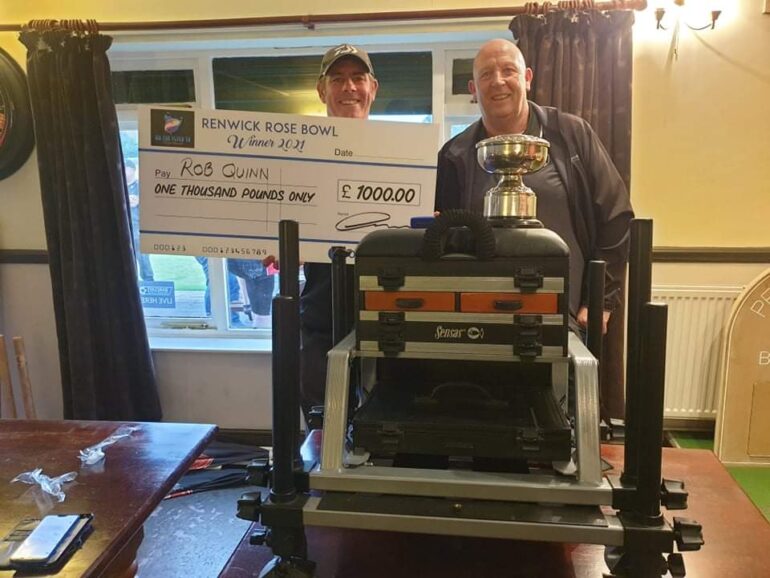 Finally, the big day we had all been waiting for!!

Sunday the 12th of September saw the accumulation of all the hard work over the past few months, that had been put into bringing back the Renwick Rose Bowl competition, after over two decades of not being fished for.

Over 100 anglers took part on several qualifying rounds on the banks of the River Trent, over the last few months with only 20 earning their spot in the final.

I think that it is only fair to mention these Anglers and the fact they qualified against what is arguably some of the best River Angers in the country.

The draw was at Branston Cricket club which has very kindly been used for the HQ for this competition. Steve Tivey was good enough to arrange a breakfast for the Anglers and the many helpers that had come on the day.

The weather was great and there had been a few days rain prior, giving the river a bit of colour. Co-organiser Neil Lawerence had made no apologies, all the way through the competition telling anyone that would listen that big Barbel were resident on the stretch, however up untill now they had proven elusive.

At the draw, the first hand in the bag was well known starlet ace Howard Kaye, the fancied peg by everyone was peg 1. As Howard walked up he told me he was going to draw it, hand goes in the bag and unbelievably he came out with the sought after peg 1. As you can imagine this was followed by moans through out the room and cries of ” Thats it then, its all over”

These Anglers are a funny bunch and as we all know, it just simply would not be a day out without a good old moan.

No stranger to a good old moan was another ex starlet man Dean Cherrington who had drawn the other end peg, peg 20.

Dean was less than impressed with his draw and the disappointment in having drawn the peg was obvious on his little cabbage patch kid face, bless him.

At the riverside, a few of the other anglers during the set up also voiced their concerns about pegs they had drawn, Clive Lloyd was worried as his peg was boiling through a bit and also Robert Quinn who had drawn the beach peg, also said that he did not fancy the look of it.

After explaining to everyone that fish are in fact impressive creatures and have things called fins, allowing them to actually move about underwater, meaning strangely that they could be anywhere. everyone seemed to settle down and concentrate on the job in hand.

At the all in, it was obvious that the majority of anglers, were setting their stall out for a decent bonus fish early on.

We had several stewards through out the stretch on hand to help any anglers that needed help getting to pegs etc, more importantly however they were there, in case any big Barbel were caught and needed to be weighed and returned to the water.

As the match was about half an hour in, Neil Lawrence made an announcement that Rob Quinn on peg 3 had landed a big Barbel. After the fish was weighed and fully supported until it was fit enough to be returned, Neil let the 9lb 2oz beauty return to the deeps. This obviously was a great start for Rob, especially off a peg he didn’t fancy.

Through out the rest of the match, it was quite clear that no other big fish were making an appearance, many of the anglers just got their heads down and fished for the silvers.

We were lucky enough to have been filming through out the day for a video that will be releases shortly, this was great as it allowed us to keep in touch with the anglers and their progress.

As we all know though, most anglers are not very good at telling the truth but most seemed to be admitting to around the 5lb, with the obvious exception of Rob Quinn who had started to fish for silvers having the hefty Barbel to boost his weight.

At the all out, all of the lads had a smile on their face, although the fishing had been difficult for some, the praise and enthusiasm for this competition after being away for so long was simply outstanding.

All of the sections were weighed in and under the instructions of the worlds most grumpiest man namely Gary Rodgers, none of the scales men were to discuss weights with the Anglers. This was to prevent people from just going home after, in the hopes that everyone would return to the club for the presentation, and also to support the cricket club whom had supported us.

The plan worked wonderfully with every angler and every helper returning back for a few beers and the presentation. i would like to think it was for this reason they did come as, people talk so the results would have most certainly already be known, so again the support was amazing.

Our chairman Dave Fern who has been fantastic in the support he has shown to the Match section, took to the mic and did a brilliant job in doing the presentation.

There was a lot of banter and a considerable amount of mickey taking, especially to those who has moaned about pegs then gone onto win a bit of money, but i wont mention any names- Dean Cherrington and Clive Lloyd lol.

The overall results were so close at the top, that i dont think many people expected it. we all assumed that Rob Quinn had taken the match out with his early Barbel, however that was not the case.

The final results were:

1st place was Rob Quinn with 12lb 2oz, although he had the welcome bonus fish early of 9lb 2oz, he had struggled through the rest of the match only managed to put 3lb of silvers to his final weight. This was thankfully for him though, just enough to take the overall first spot, and walk away £1000 and a brand new Sensas seatbox, kindly donated by Fishermaina in Burton.

2nd place was Steve Stone, who fished an amazing match on peg 9 from start to finish and targeted the silvers, weighing in 12lb dead, agonizingly for him, just 2 oz behind Rob Quinn. Steve went home with £500 for second place, not to bad for a days work.

The two main section winners, each taking home £150 were:

The four zone winners who all took home £50 were:

Stuart Raynor from peg 10 with 10lb

Dean Cherrington from peg 20 who managed to moan a few fish on for 6lb 8oz lol.

Wow, well where to start, when we first started this competition, i was not sure that the interest would be there. With it not being fished for, for so long and with the obvious decline of natural venue match fishing, i really did think we had bitten of more than we could chew.

However as is his personality, Neil assured me that in the words of Kevin Costner “Build it and they will come”, and thats exactly what happened. We sold the qualifiers out within a month and also attracted the attention of some very well known River anglers. It was never our intention but we even affected the attendance of other matches that had been going on in the area, as people wanted to try and get onto our competition.

The support and comments we have received from this competition has been nothing short of amazing, we feel very humbled by the response we have received and i can only thank you. It has made all the hard work behind the scenes on the phones and paperwork, logistics etc that does not include all the hard work in clearing and making new pegs etc all that much more worth while.

Going forward, we feel that this competition can only grow, plans are already under way for next years event and we are already looking forward to what that might offer. Things are certainly looking good for the future of the match scene within our club and thanks to the open status of all our matches, we are attracting Anglers from all over, which can only be a good thing.

I feel for the first time in a long time we are standing united and working together, it goes to show that Match anglers and pleasure, specimen anglers can and should see the benefits that each brings to the banks.

I would also like to thank the following people for all their hard work in helping to get this event off the ground this first year:

Thanks to you all, and see you next year. Tight lines folks

Please also keep an eye out for the video that will be uploaded onto the On The Flyer TV you tube page soon.